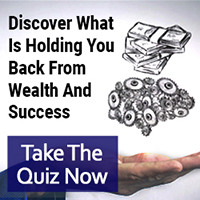 So the question remains, how does a person like Bill Gates become the richest businessperson in the world in his thirties? Or how does Warren Buffet become the richest investor in America? Both men came from middle-class families so they were not handed the keys to the family vault. Yet, without great family wealth behind them, they rocketed to the apex of wealth within a span of a few years. How? They did it how many of the ultra-rich have done so in the past and will be doing so in the future. They became ultimate investors by creating an asset that is worth billions of dollars.

The September 27, 1999, issue of Fortune ran a cover story titled "Young and Rich, the 40 wealthiest Americans under 40." Some of these young billionaires are:

You may notice that the top 10 of the top 40 young rich are from computer or Internet companies. Yet there were other types of businesses listed as well:

I find it interesting to note that the non-Internet-related rich people came from businesses such as a pizza company, the rap music business, and sports. Everyone else was in computers or the Internet.

Managing Your Money At All Ages

Money management is an art. Sadly, it is becoming a lost art. We are becoming poorer each day just because we cannot manage the resources that we have so painstakingly accumulated. We don’t know how to manage our assets and nurture them to grow.

Mind Of A Millionaire